Posted on October 12, 2017 by RevolutionaryDetective 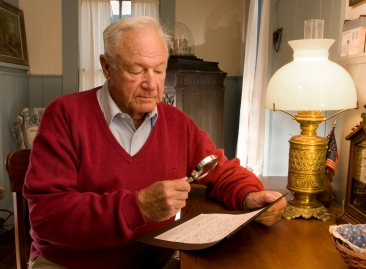 Revolutionary War historian and author Robert Mayers will be the guest speaker at Union County’s Four Centuries in a Weekend at the Deserted Village on Sunday, Oct. 22.

Mayers, who plans to discuss Gen. George Washington’s troop movements in the Watchung Mountains, among other topics, will speak at 1 p.m. at Masker’s Barn.  His talk will be followed by a question and answer session and book signing.

“We are fortunate to have an author of Mayers’ caliber come to talk with Union County residents about the history in their backyard,” said Freeholder Bette Jane Kowalski.

“When the County created the Battle of the Short Hills Historic Trail several years ago,” Kowalski said, “we recognized the route Washington’s retreating forces took up what is now New Providence Road–just to the west of where everyone will be listening to Mayers’ presentation.”

Mayers’ book, Searching for Yankee Doodle, examines the lives of the common foot soldiers who fought for American independence.

“For most of America’s history, little was known about the identity of these men, why they fought and how the war affected their lives,” Mayers said. “A few were known for their exploits in battle, but most Yankee Doodles appear only on lists of thousands of shadowy names published by each state.”

“Yet the men of the Continental Army were the people most responsible for achieving America’s independence,” he said. During the course of his years of research into the lives of the “grunts,” Mayers said the research was daunting, but worth it.

“When you  read their words and learn more about their daily lives,  these soldiers lose their anonymity,” he said.

The Deserted Village is located on Cataract Hollow Road, off Glenside Avenue in Berkeley Heights.  Those planning to attend Mayers’ talk should arrive early, either to walk to the barn or wait for a haywagon and ride the ¼-mile to the facility.

Four Centuries In A Weekend, when historic sites across the County are open for the weekend, is coordinated by Union County’s Office of Cultural & Heritage Affairs. For more information, go to ucnj.org/4C.