Posted on March 4, 2019 by RevolutionaryDetective 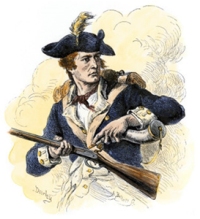 Author and Historian Bob Mayers explores the vastly different opinions have been offered over the years by historians concerning the true image of the most essential  element  of the War for Independence-the common foot soldier. For most of America’s history little was known about the identity of these men, why they fought and how the war affected their lives. A few were known for their exploits in battle, but most Yankee Doodles appear only on lists of thousands of shadowy names published by each state.  Yet the men of the Continental Army were the people most responsible for achieving America’s independence.

Who exactly were they and what inspired them to endure appalling hardships during the most critical time in American history? Reading their words and tracking their actions day to day brings these soldiers to life. We can experience their emotions and exposes the attitudes and behavior of these valiant warriors.  Mayers unravels the lives of the “grunts,”  “doughboys” and “GIs” of our most important war. He has been able to salvage information that for more than two centuries since the Revolution ended  has been a daunting challenge for other historians.

Mayers many works on the Revolutionary War are based on his on-site experience and primary sources combined with the discovery of original documents and oral accounts passed down in his family through many generations. His works include

“Searching for Private Yankee Doodle” George Washington’s common soldiers, the men of the Continental Army. Who were they and what inspired them to endure appalling hardships?

“The Forgotten Revolution”  and Revolutionary New Jersey, Forgotten Towns and Crossroads of the American Revolution cover  battlefields, encampments and sites of many critical events of the War that have been lost or neglected by history.

“The War Man”  is a true account of a soldier in the Continental Army who served for the entire eight years of the American Revolution.

Mayers is an active member of several historical societies and a frequent speaker and contributor to publications. He has spoken at West Point and the Pentagon and has recently been on Comcast TV and published in the History Channel Magazine and Garden State Legacy

He served as a combat officer in the Navy and Marine Corps. His military experiences provide him with a deeper perspective of the campaigns and battles depicted in his works.