Posted on October 1, 2015 by RevolutionaryDetective 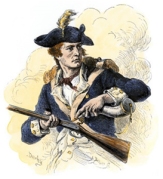 “The Forgotten Revolution in New Jersey – Revisiting nearby places in the American Revolution that were critical but neglected by history.”

On Wednesday, October 7, at 1:00PM, Bob Mayers will relate what happened in the Watchung area and nearby in Somerset County during the war. Places here have been forgotten, are unmarked, built over, shrouded in mystery, distorted by mythology and unknown even to local people. Few people have heard of the incredibly fierce Battle of the Short Hills fought in Edison, Scotch Plains and Plainfield. The defeated Americans moved their wagons full of wounded soldiers up Bonnie Burn Road and down Valley Road through Watchung and Warren on their way to Bridgewater. For many years afterward Bonnie Burn Road was called “Bloody Gap.” The entire supply column of Washington’s Continental Army also marched down Valley Road in the town on the way to the great victory at Yorktown Virginia in 1781. This road was often used as it provided the security of being behind the first ridge of the mountains.